May 2022 Brings Some Heavy-Hitting Vulnerabilities

Automox Experts Weigh in on May 2022 Patch Tuesday Release

This month’s Patch Tuesday looks like a breeze at first glance, but don’t let the numbers fool you! There are some critically important vulnerabilities to get fixed up right away.

Unlike April, May’s Patch Tuesday lands with only 74 vulnerabilities. Although this isn’t a large number, this month makes up for it in criticality and broad infrastructure headaches. The big news are the critical vulnerabilities that need to be highlighted for immediate action. This month features vulnerabilities in NSF, Remote Desktop Client, and Active Directory. Windows NFS, or Network File System, features a CVSSv3.1 9.8 vulnerability. This vulnerability allows for remote code execution and is present in every Windows Server version from 2008 forward.

Next, keep an eye on the dark horse candidate for IT frustration: a vulnerability in Microsoft Exchange Server that requires not only a patch but a configuration change to fully remediate. This vulnerability scores an 8.2 in the CVSSv3.1 rating, but only garnered an “important” from Microsoft. 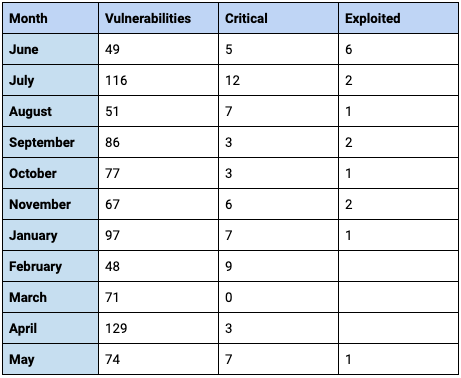 CVE-2022-22017 is a critical vulnerability with a 7.3 CVSSv3.1 score, found in the Windows Remote Desktop Client (RDC). CVE-2022-22017 is present in the RDC for Windows 11 and Server 2022. RDC is a tool that allows users to directly access and manage a remote device through the client application. The vulnerability is a remote code execution or RCE vulnerability. RCE allows adversaries to run malicious code on a target system. An attacker successfully exploiting an RCE can take control of a target system, read or delete data, makes changes to the system, or directly run malicious code. Automox recommends patching this vulnerability within 72 hours to minimize exposure before adversaries weaponize it. - Jay Goodman

A critical, CVSSv3.1 8.8/10, vulnerability in Active Directory Domain Services leaves systems vulnerable to elevation of privileges when exploited. An attacker with minimal privileges can exploit CVE-2022-26923 via a simple attack over the network with no other user interaction required and gain administrative privileges, though Microsoft notes that there are no known exploits in the wild.

All Windows Server versions from 2008 upwards (including Core) are vulnerable. Although the CVE has yet to be exploited in the wild, and no exploit code is publicly available yet, we anticipate this vulnerability will be targeted by threat actors due to the ease of exploitation. An unprivileged attacker could make an unauthenticated call to the NFS service to trigger remote code execution (RCE) without user interaction. Due to the severity, prevalence of Windows NFS on Windows Server, and ease of exploitation, Automox recommends patching vulnerable systems within 72 hours. - Peter Pflaster

With a high priority and low attack complexity, CVE-2022-21978 impacts Microsoft Exchange Server 2013 (Update 23), 2016 (Updates 22 and 23), and 2019 (Updates 11 and 12). Successful exploitation requires the attacker to be authenticated to the Exchange Server as a member of a high-privileged group and could lead to a scope change (S:C) in which an attacker with elevated privileges on the Exchange server could gain the rights of a Domain Administrator. This could allow access and controls outside of the expected scope of the targeted functionality.

Automox recommends patching and updating to the most recent Microsoft release immediately. The security updates released for this CVE require that the Setup file be run using the Prepare Active Directory domains command. This can be done by running one of the following commands in a Windows Command Prompt window on the Exchange server after the update has been downloaded:

For more information, see Step 3 of Prepare Active Directory and domains for Exchange Server. In addition, seek out newly created accounts as attackers have been observed creating accounts as part of the attack chain. - Gina Geisel

Although successful exploitation of this vulnerability requires an attacker to win a race condition, the net result, if exploited, is that the user would get a Denial of Service response. There are no workarounds for this CVE, but fortunately it has not yet been exploited, and Fixed Builds from Microsoft are available. - Shari Barnett