Women in Tech: Our Heroes & Their History

The course of tech history has been shepherded by innovative women since well before the dawn of personal computing. Here to chat about women tech heroes and how they discovered their own place in tech are Automox Manager, Product Management Dani Renaud, and Talent Engagement Specialist Lex Chrisbacher. 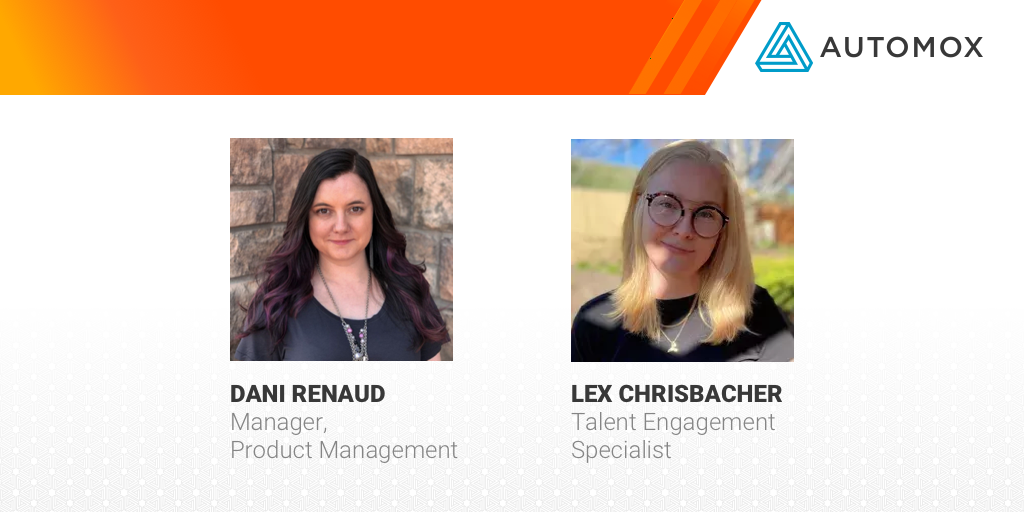 So, without further ado, let's get started.

What’s your backstory? How did you get interested in tech?

Dani: My mom brought home our first computer when I was 12. Immediately, I began playing around with all the different programs. The art-based programs were my faves. At 13, I started playing Neopets – the game allowed you to raise virtual pets. I found an entire economy within the game, too, which was endlessly fascinating. Neopets offered a 10-step tutorial on customizing your shop and pet pages by coding HTML. That’s when my budding love for graphic design smashed headfirst into code.

I blew through the tutorial and searched for more attributes on the page to manipulate. From there, I branched into developing web pages for friends and family. I participated in DECA (Distributive Education Clubs of America) to learn marketing and grow my business skills. By the time I turned 20, I’d established a freelance career in web design. My passion had become my job. I started picking up UX and web and mobile development gigs, and eventually, I found product management.

Lex: Like Dani, my early love for tech was encouraged by a parent. My dad used to work in aerospace at Honeywell. Every year, he brought me to Take Your Kid to Work Day. I loved the circuit boards, space flight simulators, and whiteboards covered in long numbers and meandering lines – it looked like magic.

My dad’s steadfast commitment to elevating women in STEM and my early adoption of feminism (thanks to the Spice Girls and their girl-power anthems) was the perfect combination. STEM was cool, and breaking barriers was even cooler. I was hooked.

Why did you choose to work in tech? What excites you most about the industry?

Dani: I’m endlessly fascinated by the idea that computers help us create visible yet intangible things. I always loved pulling things apart to figure out how they worked and putting them back together again. With a computer, code becomes putty – I can shape and reshape things with just a few lines.

Then there’s the great reward of sharing the intangible things we build. Suddenly, they can be used by people all over the world. There’s no shipping or manufacturing – our innovation is just live, instantly available. That idea still gets me every time. Working in security and endpoint management, I help design software that protects entire industries that produce tangible and intangible products! I don’t think I’ll ever not be fascinated by that kind of reach.

Lex: My tech career, at its core, is a love letter to startups. I came from the traditional world of journalism, print, and radio specifically. While a career in news provided the fast pace I wanted, it also came with too many rules and too much red tape.

Startups always seemed like the next frontier. They’re still malleable enough to be shaped by current culture and brilliant people, but free from the rigidity of more entrenched organizations. I didn’t want to fit into a mold; I wanted to build something completely new and industry-changing. Three tech startups later, I still find the growth, possibility, and newness so exciting.

Can you share your favorite tech success or experience?

Dani: One of the coolest things I’ve ever worked on never made it to market. I was working for a small company that designed and developed mobile apps. We wanted to pitch a delivery app to a major retailer. The first version was just for the delivery team to help track deliveries for drivers. The map view was similar to Doordash or Grubhub’s in-app map in that you could see where a delivery driver was, follow them on the map, see how many stops away they were, how many deliveries they had, etc. It even plotted the fastest route for that driver. But in 2013, we were just a bit ahead of our time. The retailer turned us down but then built their app a few years later and expanded it to customer views. I like to think our work influenced what they created. Watching how delivery exploded during the pandemic makes me think of that experience.

Lex: In a previous role, I was fortunate to be part of a partnership with a local STEM high school. My team and I toured the campus and met the students involved in their robotics lab. The work they were doing was incredible! Even more impactful was seeing the passion and excitement bubble over as this group of teenagers talked through the work they’d been doing and how it shaped their career aspirations. I remember how aimless it felt to be a 16-year-old trying to decide what I would spend my life doing. But here were these kids who knew exactly what inspired them. It drove home the importance of establishing creative and supportive spaces for students to explore technology.

Who was your first tech hero?

Dani: Hedy Lamarr! I can’t remember how I first learned about her, but her story fueled the mindset that I could do anything. She was a beautiful and talented actress and a genius inventor. During WW2, she wanted to find ways to help the war effort. She all but quit acting to join the Inventors' Council. Hedy Lamarr and her composer friend George Antheil developed technology for a frequency-hopping system to keep torpedoes from being jammed and thrown off course. Their tech wasn’t used until the 1960s, but it was the basis for the WiFi and Bluetooth technology that we use today. And tech innovation was just her hobby!

Lex: This might be a slightly out-of-the-box answer, but I’ve always been fascinated by Amelia Earhart and the Fly Girls of the 1920s and ’30s. I even have a tattoo of Earhart’s first plane, the Canary, which was a bright yellow, second-hand Kinner Airster biplane. 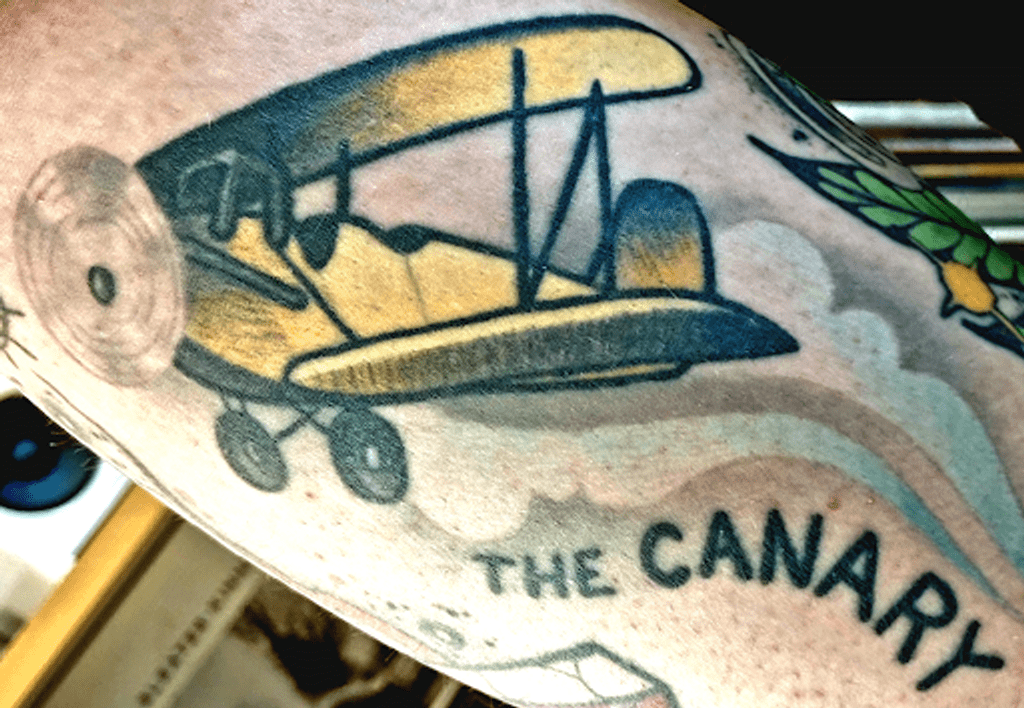 Amelia Earhart and the five Fly Girls broke into the world of aviation despite rampant prejudice and sexism. They defied expectations in STEM and sport, but they also pursued careers, wearing pants (!!) and taking on the establishment in an unheard-of way.

In an interview with Smithsonian Magazine, Boston Globe reporter and Fly Girls author Keith O’Brien said, “One thing that struck me about these women: Even though they were rivals in the sky, they were friends on the ground.” Now that’s girl power.

What tech hero from history do you wish you could meet? What would you ask her?

Dani: I have a couple. Ada Lovelace was the first programmer – a woman! To top it off, she envisioned computers being more than just computational, but also as a collaborative tool in our lives. I’d love to see what kind of startup she would develop today. Then, Katherine Johnson sent people to space and, more importantly, brought them home safely. She did all that during a time when women, especially minority women, weren’t respected or included.

I have no idea what I’d ask them. I’d just want to follow them. Learn from them. Watch them do the everyday things that made them heroes despite navigating the prejudice and challenges of their times. Women who break the mold are always my heroes.

Lex: I’d love to spend an afternoon with computer scientist Admiral Grace Hopper. Her impact in the world of computing was tremendous. She inspired generations of women to enter the field of computer science, both in her career and through the Grace Hopper Celebration created in her honor. What do you ask someone like Grace Hopper? What’s it like to persevere despite near-impossible odds? Do trailblazers know they’re making history while it’s happening? Did you really coin the phrase “It is often easier to ask for forgiveness than for permission”? I think I’d need more than an afternoon.

Who inspires you today?

Dani: I have a few modern heroes, too. My mom will always be one. Her strength and her self-sufficient drive still resonate with me. She owned a book called “How to Fix Anything.” It was well-worn. She taught herself to do so much.

The second is Dr. Sian Proctor. You might know her from hits like literally flying to space. She’s also a geology professor, a pilot, and an artist. I connected with her once on nerdy space books, and I’ll never forget that chat. She is the science nerd I always wanted to be.

The last hero I want to mention I’ve only discovered recently: Soledad Antelada Toledano is a white-hat hacker and was the first woman and Latino to join the Lawrence Berkeley National Laboratory’s cybersecurity department. Now, she works at Google. Finding other Latina women in tech to look up to is so cool; we don’t talk about that enough.

Lex: I’m deeply inspired by LGBTQIA+ people taking the tech world by storm. Folks like Lesbians Who Tech founder and CEO Leanne Pittsford; Megan Smith, the former Chief Technology Officer of the United States; and TransTech Social Enterprises founder and actress Angelica Ross. I believe these are just a few of the true history-makers of our time. They are claiming space in the STEM industries, but they’re also elevating the people around them in the process.

Can you recommend any toys, clubs, or opportunities for girls interested in tech to build their skills?

Dani: Oh yeah. Here’s a list of clubs that run the gamut:

One other thing I’d recommend is playing lots of games like Minecraft and Roblox. On the surface, Minecraft just seems like another video game. But I think the open world-building aspect helps kids harness their creative power. You can create games within Minecraft and learn to program by building mods or using Redstone within the game. It's an endlessly blank canvas to explore artistically. Roblox is similar but even more of a platform where kids can build their own experiences using Lua. Anything that lets kids explore their interests and imaginations is a huge plus. Both games remind me of my Neopets experience, but kids today are light-years ahead of where I was back then.

Lex: Dani nailed this one! I’d also add that you should never underestimate the power of mentorship. Girls need to see people who look like them succeeding in tech – you might be that person!

Dani: Tech can be the great equalizer. With the internet at your fingertips, you can build and explore anything and everything. I want to see tech become more accessible, empathetic, diverse, and worldly. The more people have access to explore and develop new ideas, the better our technology will become. The more innovative our solutions will be. Like Ada’s vision, I see it becoming more important and integrated with our lives.

Lex: I couldn’t agree more! The more voices we add to the conversation, the more impactful our work will become. After watching the world go remote during COVID, I think we learned we could foster community, collaboration, justice, and growth through technology. The future of innovation in tech is intersectional, accessible, and inclusive.

Visit the community to see what other Automoxers have to say about innovative women in tech.